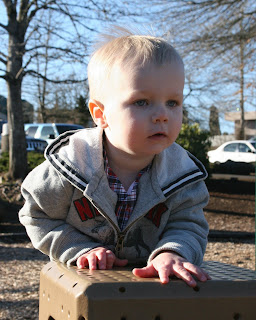 Life has been a bit hectic, but lots of fun too. Dad had to take the car to Salem several days this past week so Mom and I again spent a lot of our days walking to places here in downtown Gresham, my favorite place being the park, of course. Mom also thought it would be *fun* to take me to get my first real haircut. There is a place not too far from us called 'Kids Kuts' and right away I thought something was up. The lady who checked us in asked my name and when Mom told her, she replied, 'No way! My son's name is Jonah and it's his birthday today! I was just talking about him!' Then she went on to ask what my middle name was and Mom told her I had two and she said her son also had two and then Mom told her the first one was Steven to which she replied, 'My son's first middle name is Steven too!' To our relief, her son's second middle name was not Anderson. I think that would have been a little too creepy. Anyway, so Mom and I sit down in this nice little chair in front of a big mirror and another lady comes over and starts cutting away at my head. I wasn't too thrilled with all this so the cut didn't last long. You can see that it didn't look too different in the after picture as compared to the before. But, at least it's over with: my first official haircut. I think Mom may keep cutting it (she's more okay with having to stop mid-cut) from here on out, at least until I grow out of my fear of scissors and those who use them. The good news is that they had a train table at the place that I was able to play with after all the trauma I endured. AND, Mom took me to the park later as well. :) 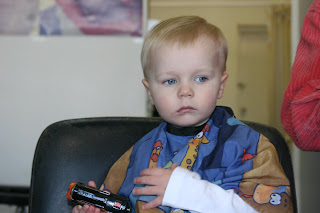 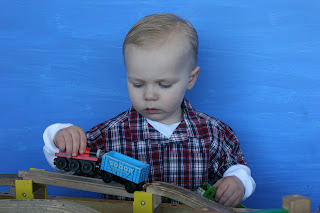 Later in the week, when we did have the car, Mom took me to Laurelhurst park in Portland with Sara and Kate. They had a pretty fun playground, so my guess is we'll go back! In the first photo below, you'll see me pointing up. Mom had just asked me where the airplanes were (several had just flown by) and this was what I was thinking, 'duh, mom.' 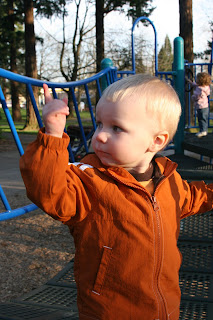 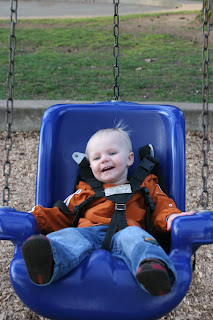 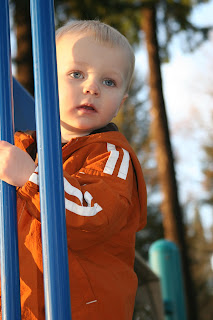 On Saturday Dad had to go to Portland State to work on a school project so Mom took me to the Children's museum. What fun! Can you guess what room I liked the best? Okay, that was a no-brainer if there ever was one. Here I am in my happy place. The second photo is of me outside the museum with a cool statue that I was very impressed with. Moo! 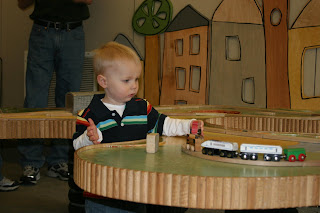 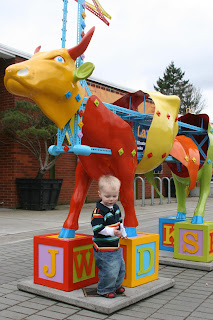 Later that day Mom, Aunt Mary and I went to Portland to do some shopping on NW 23rd. Dad met us there after he finished his school work and then we all headed to dinner at the Laurelwood. Whoo hoo! Can you guess why I like this place so much? Yeah, another train table. Big surprise there. 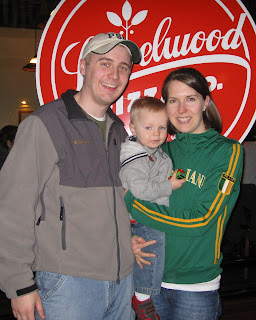 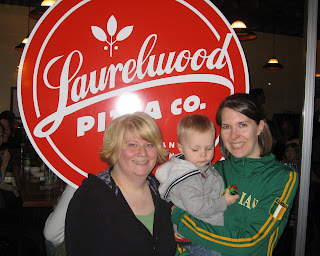 Lots of fun stuff! If you ever come down this way we'll take you to the train museum here in Sac....it has "retired" trains inside the museum that you can go into....even pretend to drive.

I just got done looking at my friends blog who lives in seattle, now I am reading yours, and I am even more missing the northwest. What a fun week. We spent most of it inside because of the snow...yeah I said it snow. Looks like you guys had a lot of fun. YEAH for park trips and field trips.

Gavin doesn't like getting his hair cut, either. Only he's had several (his first when he was only four months old... he had crazy amounts of hair when he was born). Cute pictures!!!