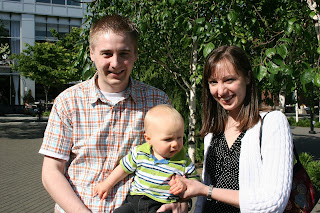 Just a quick note to post some photos of a recent visit from my Aunt Carrie, who came down from Seattle to visit me today. We went to the Pearl District to check out the park. We also stopped in for a snack at a coffee/ice cream shop near the park that has a play area for kids. Fun, huh? 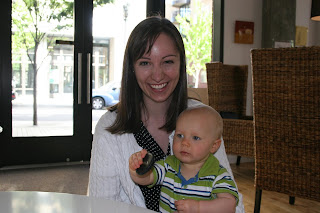 It has been a little while since I wrote my last blog. I’ve been enjoying the sunshine, and generally taking advantage of being in America’s Most Livable City! Here are some photos of recent things I’ve been doing.

I went to have Gelato at Alotto Gelato on NW 23rd with my friends John & Rebecca (they’re the friends with Blaze, who is big and black/white, and whom I’m a little scared of; he wasn’t there that night; my parents say he’s a really great dog, though, and I sometimes like petting him). Outside of the Gelato store, there is a life-size pig statue, so I decided to have a photo snapped of me with it!

On another day we went to check out John and Rebecca’s new boat (they call it the Boat-itis, get it?) on the Columbia at Jantzen Beach. WOW! It was nice! John let me wear his “captain” hat, and I enjoyed feeling the boat rock.

The next week, it was still very sunny, and my great-Aunt was visiting from Boise. So we decided to go to the zoo with my Grandma Jane and Aunt Jean. The elephants were my favorite animal to watch during this visit to the zoo. I even got to see the baby elephant up close!

We’ve also been having lots of playdates in various parks. Unfortunately I can never seem to lose my mom when Kate’s around… doh. Anyway, it’s been fun hanging out in big groups. Check out this photo with me and Kate, and our friends Bodhi and Isaac. Don’t you think Kate is diggin' me? Yea, I thought so. The next photo was also taken at Esther Short park. Little-known fact: Esther Short is the oldest public park in the west. It was created by the U.S. army before Oregon was even an official territory!

As most of you may remember, I was born on the glorius day of June 2, 2006. Recently, we met up with another girl, Sarah, who was also born on that day! We went to lunch with her parents a few weeks back, when it was really nice and sunny. We ate outside at Beaches on the Columbia. It was really great! Here is a photo of me, my mom, Sarah, and her mom Karin.

Anyway, I hope that you are doing well and enjoying spring-time. Peace.
Posted by Dave Dyk at 10:08 PM