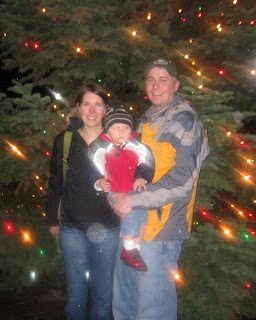 We had an eventful weekend checking out different places around the city that were celebrating the holiday season. On Saturday we went to Fairview City's first tree lighting. We actually caught the tree being lit this time! It was real wet outside so we didn't stick around too long, but I did stop in and say 'hello' to Santa who was hanging out in City Hall. I also got to see my friends, Bart and Marilyn, and their daughter, Bethany and her son, Freddie. Fairview is a pretty great city so we're glad we live close enough to enjoy it. 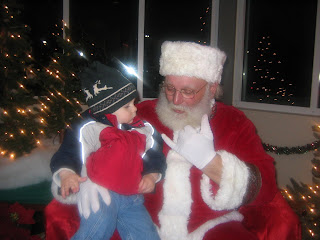 I've been really into the 'choo choo' train lately. Sometimes I make Mom pick me up and bring me over to the kitchen window just so I can see the MAX train. So, on Sunday we rode the MAX to downtown Portland and went into Macy's to see Santaland. They don't have the monorail running anymore since Macy's took over Meier and Frank, but they do have what remains of the train in a room where kids like me can sit in it and pretend we're riding the real thing. I'm not quite sure why I chose to sit where I did in the train, but the kids behind me said they didn't mind. After awhile, I got the whole train to myself, but I found I liked it much better when there were other kids there to ride it with. While in Santaland, I also got to see all of Santa's reindeer, which was pretty cool. I wasn't sure if they were real at first, but Mom and Dad assured me they weren't. (In case you were wondering, when I get a bit older, my parents plan to tell me the true story of Santa so I'm enjoying all this while I still can.) 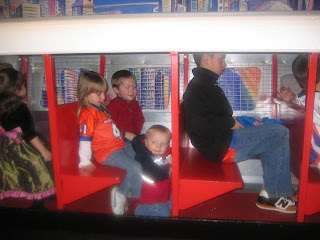 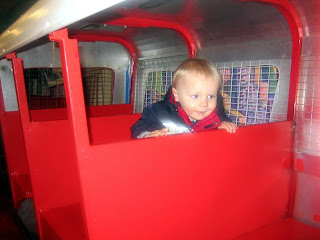 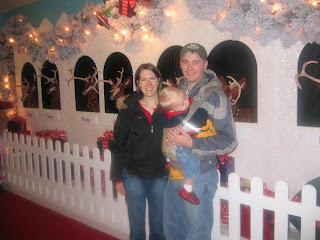 Overall, I'm really enjoying this holiday season thus far. I've had fun playing with the decorations on our tree (or 'tee' as I say). Mom only put the soft ones down low where I could reach, so I haven't been able to cause too much trouble yet with that. We've even had a few flurries of snow lately, which was fun to see. I kept saying, 'No! No!' (I was trying to say snow) as it came down. Unfortunately, not much stuck on the ground, but it was fun anyway.
I'm also enjoying different kinds of foods. I was kind of stuck on the same things there for awhile, but I've decided to venture out and try what else is out there. Whenever I get something I really like, I say 'Mmmm!' Mom's planning to make gingerbread cookies sometime soon with Nana and I overheard some talk about Nana making truffles for us.... I'm looking forward to enjoying all those tasty holiday treats!
Posted by Dave Dyk at 2:53 PM

Jonah, you're just too cute! It looks like you are having a fun holiday season. I love how your jacket seems to glow in every picture because of those reflectors. Hailey and Hunter say hi and they can't wait to see you again!

I'm so jealous that you are enjoying this time of year! I feel like I can't keep up....I hope you have a fun holiday season (maybe we'll see you soon!).